“The value of another’s experience is to give us hope, not to tell us how or whether to proceed.” - Peter Block (through Woody Zuill in the beginning of his talk on “Mob Programming”)

Following what John Sonmez had been doing, and to encourage myself to continue reading and learning, I am listing here the books I have read the past year.

NOTE: Many of my readings here are what Mortimer Adler calls Inspectional Reading . You cannot expect me to have already mastered all the materials presented in the books listed below. I will have to reread them, and reread them, and apply what I’ve learned, to master them.

“Stealing from God: Why Atheists Need God to Make Their Case” by Frank Turek

Chistianity is not — contrary to popular opnion — all about having your good deeds outweigh your bad deeds.

God can’t force us to love Him. Love, by definition, must be freely given; it cannot be coerced. (p. 223)

… In fact, many atheists want to legislate their own morality.

Many don’t realize this because they lump morality and religion together. But laws can and do legislate morality without legislating religion… (p. 106) 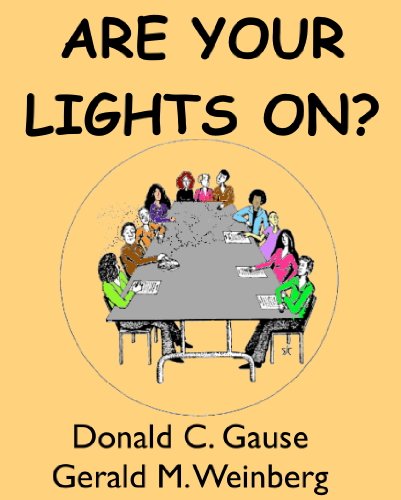 “Are Your Lights On? How to Know What The Problem Really Is” by Donald C. Gause & Gerald M.Weinberg

We never get rid of problems. Problems, solutions, and new problems weave an endless chain. The best we can hope for is that the problems we substitute are less troublesome than the ones we “solve.”

… Remember Thomas Sowell’s “There are no solutions; only tradeoffs”!

Designers, like landlords, seldom if ever experience the consequences of their actions. In consequence, designers continually produce misfits. A misfit is a solution that produces a mismatch with the human beings who have to live with the solution.

… Something software designers need to remember??

DON’T SOLVE OTHER PEOPLE’S PROBLEMS WHEN THEY CAN SOLVE THEM PERFECTLY WELL THEMSELVES.

Not only did the interested parties know and feel much more about the problem, but after creating “their” solution, they were ego-involved in seeing that it was carried out.

We’ve already seen how many problems in our society stem from systems designers and decision makers who don’t experience the problems they’re “responsible” for.

… the source of the problem is most often within you.

I like reading this book over and over again.

It is after you have realized that there is a real Moral Law, and a Power behind the law, and that you have broken that law and put yourself wrong with that Power — it is after all this, and not a moment sooner, that Christianity begins to talk. When you know you are sick, you will listen to the doctor. When you have realised that our position is nearly desperate you will begin to understand what the Christians are talking about. They offer an explanation of how we got into our present state of both hating goodness and loving it. (p. 31)

Of course, I quite agree that the Christian religion is, in the long run, a thing of unspeakable comfort. But it does not begin in comfort; it begins in the dismay I have been describing, and it is no use at all trying to go on to that comfort without first going through that dismay. “ReChurch: Healing Your Way Back to the People of God” by Stephen Mansfield

perfection is not the only door to significance. (p. 22)

Here is the lesson: Great men and women of God are not exempt from hurt and offence. Instead, enduring the wounds of fellow Christians with mercy and grace seems to be the call of every true saint, and we should not expect it to be any different in our own lives.

Indeed, it seems that the greater a man is in God, the more opposition from fellow believers he is forced to endure. (p. 30)

“Pagan Christianity? Exploring the Roots of Our Church Practices” by Frank Viola and George Barna Very often when I ask that question, there is a noticeable change in the atmosphere. Not that there’s a response of hostility or anger; that hardly ever happens. But there’s a sudden soberness that descends, and it’s almost palpable.

This is because of the way I ask that question. I don’t say, “Do you have guilt?” I don’t waste time trying to establish the reality of guilt, because guilt is something of which we are all aware. Guilt is one of the most paralyzing and debilitating forces that attacks humanity, and we try to do all kinds of things about it…

Some materials by Michael Heiser

First heard about Michael Heiser in Frank Turek’s interview with him in “EP33: The Unseen Realm w/ Dr. Michael Heiser”, (recommended to me by an officemate )

There are intentional ambiguities in the biblical text when it comes to prophecy. And by intentional I mean that prophecy is deliberately cryptic. There were very good reasons why, even after the resurrection, the disciples had a hard time understanding what was going on (Luke 24:44–45).

… every position on end times has significant uncertainties and, more importantly, why that ought to compel us to be gracious and charitable toward believers with whom we disagree.

… all of the end times systems look beautiful and elegant—until their assumptions are challenged by other systems.

That which could not be gained by moral perfection can’t be lost by moral imperfection. The issue is believing; you must believe. And we all know that believers, those who profess to believe anyway, turn out to really not believe. They abandoned their faith, they forsake their faith in the God of Israel and Jesus. And they go off and they worship something else. They adopt another faith, or they don’t have any faith at all. Again, the fact that they prayed a prayer, they said certain words at one point in their life doesn’t really mean a whole lot. It’s a profession that they made, but the question is “do you believe or don’t you”. If you believe you are eternally secure, if you don’t you are not eternally secure.

I remember what Paul Washer said in a sermon: “Conversion is not a flu shot. — ‘Oh I did that…’”

The impossibility, I think, referred to in Hebrews 6 refers to the finality of the work of Jesus on the cross. In other words, that is the only means of salvation for sinners. There is no plan B. The point of the language in Hebrews 6:4-6 is simply that there is nothing more that God can do to secure salvation for lost sinners. It is impossible to add anything to what Jesus did on the cross. When Jesus said it was finished, he meant it. To add something else to salvation, some plan B, would be to put what Jesus did on the cross to an open shame. So Hebrews 6 is not saying it is impossible for someone who lapses to come back, to believe. It is possible, and God will accept them. What it’s saying, it’s telling us that those who turn their back on the gospel, they don’t have any other hope. There is nothing else that can bring about salvation. The unbeliever must believe in the thing they currently don’t believe in. There is no other way. God has nothing else to offer except what happed at the cross.